Olaf Lemke’s store and gallery are located in Eisenacher Straße in Schöneberg: the store is on the ground floor and the gallery on the first floor. His frame collection is special. He does not mind that his frames from the 15th to the beginning of the 19th century show their age.
While some have the gilding dissolved, exposing the undercoat, others have a lively patina courtesy of hundreds of years of oxidation. These types of frames are Olaf Lemke’s preferred choice for 20th-century paintings. The uniqueness of his approach is to combine the age-related colouring of the frames from previous centuries with the colours of 20th-century paintings. This creates an enriching interplay between old and new, frame and painting: antique frames with paintings from e.g. Pablo Picasso, Ludwig Kirchner, Max Pechstein, Max Ernst and Max Liebermann. For 40 years, Olaf Lemke has been supplying frames for famous collections, including those of Ulla and Heiner Pietzsch or Heinz Berggruen. He also worked for museums such as the Bayerische Staatsgemaldesammlungen in Munich, the Rijksmuseum in Amsterdam, the National Gallery in London and the National Gallery of Art in Washington.
When you visit Olaf Lemke in his store, he offers you a warm and friendly welcome. He is surrounded by frames; some are collages of three or four frames. “This saves space,” says Lemke, “and allows me to show as many frames as possible.” Some are arranged by period, others by subject. Every antique frame is a unique gem. The empty frames once formed an inseparable unity with the paintings they held. The more valuable the painting, the higher quality of the frame. And vice versa. “If you go back to the 15th/16th century, framemakers were as important as painters. Sometimes the painting was only completed after it had been framed. Frames were designed by sculptors and architects, such as Georg Wenzeslaus von Knobelsdorff and Johann August Nahl the Elder during the reign of Friedrich II in Berlin or in Munich by Joseph Effner and François Cuvilliés,” explains Olaf Lemke. He never makes frames smaller, because he believes that the frame and painting have to be a perfect match. After all, you are not going to trim a Cézanne or Picasso to fit a frame. Frames are also works of art.

Olaf Lemke was born in 1936 in Berlin. His father was a sculptor and his mother was a housewife who raised three children. In 1954-56, he worked as an apprentice gilder at Sprengel & Sohn and Wormuth & Sohn in Berlin. After Mr Lemke completed his apprenticeship, he saw an advert in the WELTKUNST magazine: “We are looking for guilders, F.A. Pollak, London.” Friedrich Pollak, once the most famous art dealer in Berlin, had to leave Germany in 1938. In the 1920s he owned a framing company “Pygmalion” in the Kurfürstenstraße in Berlin. In England, he played an important role in reviving the art of framing. Lemke’s father advised him against the move: “A Jewish company – they may not accept you because you are German!” Olaf Lemke went to London regardless. Pollak never made him feel unwelcome. On the contrary, he was greeted with open arms.

In his London workshop, Pollak was training the new generation of young frame dealers, including Olaf Lemke, Herman Guttman and Paul Levi who were destined to meet again years later as renowned frame dealers from New York, London and Berlin. Lemke spent three years there. He learned to restore frames and to make frame replicas that are indistinguishable from the original from the customer perspective. In 1959, he left London and returned to Berlin.
In 1961, he was offered the position of co-partner by Wormuth & Sohn. In London, Olaf Lemke also gained experience with buying antique frames as an investment in the future. However, this led to differences with Werner Wormuth: “We do not want to be a museum.” In 1969, they went their separate ways.
In the same year, he started his own business together with his wife Johanna. His mentor, Georg Sprengel, gave him a tip, “Come to Munich, I bought frames in Spain, which are bound to be of interest to you.” And they were. As Spain used to have an empire, it was possible to find frames here from Antwerp, Italy, France, Germany, and of course, Spain. Olaf Lemke said, “Spain was a paradise for frame collectors. There were frames everywhere, in every flea market. They just had them leaning against the walls. Soon the word got around, ‘The Germans are coming and they are buying wood. Old wood!’ Back then, we bought 120 frames, half of them from the 16th century. Today this is something unimaginable!” 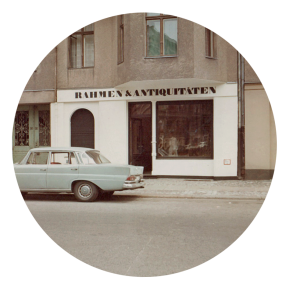 Nevertheless, it was not that easy. The negotiations during later annual trips often lasted for hours. Strong nerves were called for. Lemke, “Some dealers, especially gypsies, showed us up to a hundred frames. The whole family collected them, and they were also all present during the negotiations, up to ten people. There was only the three of us: my wife Johanna, our friend Alberto and me. They knew that we were coming because Alberto told them. They expected Germans with bottomless pockets, which we did not have. We wrote down what we were prepared to pay. The negotiations were dragging on, and broke down in the end. I said to them that we still had next year to look forward to: Amigos, hasta la proxima año. We got into the car, started the engine. Before we left, we heard a knock on the window. Alberto whispered: they accepted our offer.” The same scenario was repeated in Cordoba, Seville, Granada, Barcelona, San Sebastian, Zamora, Santiago de Compostela, Madrid, Valencia, Cuenca, Salamanca and Segovia. 10,000 kilometres per year for twenty years. Lemke bought old wood. Hundreds of frames! From Renaissance to Classicism. This became the foundation of the newly established business.

Today, Berlin-based Olaf Lemke is among the top five frame dealers in Europe, which includes dealers from England, France, Switzerland and Germany – from Berlin. It is a close-knit network that fosters friendly relations. They strive to preserve antique frames and integrate them into the modern era.