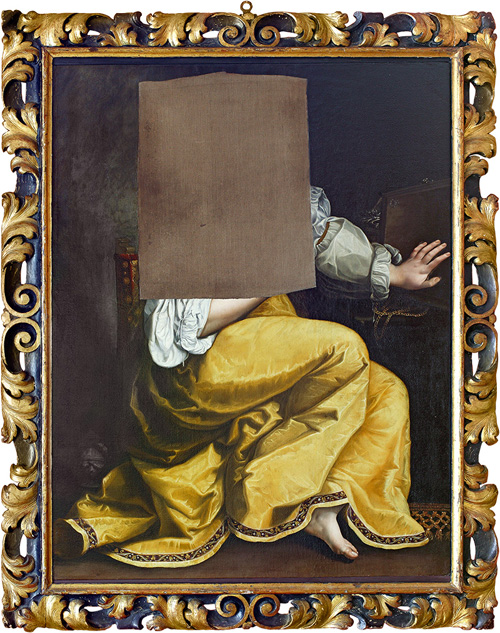 When exactly was
the painting destroyed?
And where is the cut-out
with the chest
and the head today?

"I had this painting for 30 years. I found the painting in the waste bin rolled up, dirty and cut, and I saved it and had it restored. It fascinated me as a relic, and I am still looking for Magdalena's head." said Olaf Lemke

Artemisia Gentileschi is known for painting several versions of the same motif. This is also the case with "The Penitent Mary Magdalene. A signed version from 1617-1618, which strongly resembles this painting hangs today in the Galleria Palatina in Florence (Palazzo Pitti).

Roberto Contini (Gemäldegalerie, Staatliche Museen zu Berlin, Preußischer Kulturbesitz) and Francesco Solinas (Louvre, Paris) have examined the painting and included it in their extensive Artemisia Gentileschi 2012 exhibition in the Palazzo Reale in Milan and compared it with the Florence version (Catalogue: Artemisia Gentileschi - Storia di una Passione, page 158). This confirms the importance of the work.

A reconstruction: The painting stems from the art collection of Alfred Berliner (1861-1943). The engineer and physicist made a career at Siemens and was a member of the supervisory board of the group until the 1930s. Mr Berliner died in 1943 during an air raid, his wife followed him in the dying days of the war in 1945. Berliner's collection would lie forgotten for years in his villa in Berlin-Grunewald, until an insolvency administrator had the house cleared in the early 1960s.

We suspect that the painting was destroyed in the chaos of the final days of the war in 1945; the head was already missing at the time when the house was cleared. The painting was in a very poor condition and could not be sold like the rest of the collection.

Still, the questions remain: When exactly was the painting destroyed? And where is the cut-out with the chest and the head today?